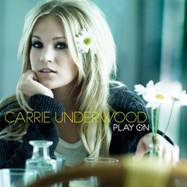 Carrie Underwood fans were excited today when they learned one of country music’s most prolific and versatile power vocalists has just announced performances across North America as her new headline 2010 tour launches next spring. The “Play On Tour,” hydrated by vitaminwater®, will kick off March 11, 2010 with special guests Craig Morgan and Sons of Sylvia. The first leg of 45 shows runs through May 30 with tickets for all shows going on sale starting next Friday, December 18.

“I am getting so excited about next year as we are currently working through all the big plans for the tour,” says Underwood. “I cannot wait to perform new music and see familiar faces across the U.S. and Canada!”

Underwood spent this past year writing and recording for her new album PLAY ON and performed a few select concerts. Her previous tour, 2008’s highly successful “Carnival Ride Tour” wrapped after 137 shows with 1.2 million fans in attendance.

Underwood recently launched her third album, PLAY ON, at the #1 spot on both the country and pop album sales charts and has sold over 700,000 copies in 5 weeks. The release earned the highest first-week sales of the year for any solo country artist at that point and makes Carrie the only country act in Nielsen SoundScan history to achieve first-week sales of more than 300,000 units on each of their first three albums. The feat also extends to American Idol, where the Season Four winner is the first contestant to launch three albums in a row above the 300K threshold, with her 2005 debut, Some Hearts, now seven-times Platinum, and 2007’s Carnival Ride currently triple-Platinum.

Underwood is a four-time GRAMMY winner, ACM Entertainer of the Year, a three-time CMA and three-time reigning ACM Female Vocalist winner, and a member of the Grand Ole Opry with total album sales now in excess of 11 million.

Craig Morgan is signed to Sony Music Nashville’s BNA Records label, and released his fifth studio album, That’s Why, last fall. His latest hit, the anthemic “Bonfire,” is currently Top 5 at country radio and headed for the top of the charts. Last year Morgan received one of country music’s highest honors – he was inducted into the membership of the Grand Ole Opry. Morgan has made more than 150 appearances on the Grand Ole Opry and plays over 200 sold-out concerts a year. He spent ten years on active duty in the U.S. Army before launching his music career and makes a point to perform as often as possible at U.S. military installations both in the U.S. and abroad.

Sons of Sylvia are currently finishing up their debut album release on 19 Recordings/Interscope Records due out in 2010. Ashley, Austin, and Adam Clark (formerly known as The Clark Brothers who won FOX’s Next Great American Band) are longtime friends of Underwood, and the band is currently featured on her new album in a powerful collaboration called “What Can I Say.”

OneRepublic to join Maroon 5 on tour

This site uses Akismet to reduce spam. Learn how your comment data is processed.